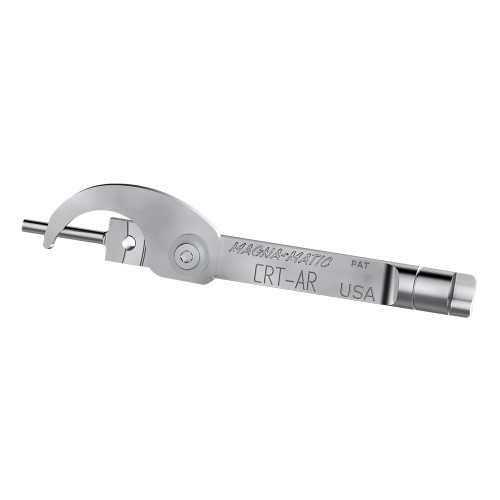 The CRT-AR is the latest evolution in carbon removal tools for AR platform rifles. This combination tool comes with 3 different scraper tips for the AR-15 the AR-10. It is a comprehensive tool that can clean the bolt, bolt carrier (front and rear) and the firing pin of both AR-15 and AR-10 rifles. The tips are each threaded to screw into the body of the CRT-AR.

Our engineered "dead-stop" reamer design fits into the bolt carrier front and rear to remove the carbon from deep dead-end hole without cutting metal.

The adjustable arm of the CRT-AR is designed to function like a small hand-held lathe. The bolt is placed on the narrow pin, which it can rotate on, then when the arm is brought down onto the bolt tail its scraper edge removes the carbon as it is rotated. This design allows you to clean any bolt tail radius. The form tools in the industry cannot conform to the variance in tolerances of different bolt tail radii. (bolt tail dimensions vary between manufacturers) This sets the CRT-AR far apart from these inadequate form tools.

The CRT-AR replaces both the CRT-15 and CRT-25 combining their features and more into one complete tool.